If we consider this Garmin’s GPSMAP 1042xsv, then it is a fish finder/chartplotter. This is one of the best chartplotter or fish finder that you can find in the market. It is packed with amazing features at quite reasonable price tag. Further, this Garmin GPSMAP 1042xsv is also very easy to use. It is a simple device that you can setup quite easily and overall, it is easy to use and understand the graphs on this fish finder.

If we account for the interface of this device, then it has a keypad interface along with the presence of multifunctional knob that controls various functions. It also comes with preloaded charts and maps such as the BlueChart g3 and LakeVu g3. These are some of the preloaded maps in this fish finder. So, this is the overview of the Garmin GPSMAP 1042xsv fish finder. There is no doubt that this is a pretty impressive, durable and a highly functional fish finder in this category.

How the Garmin GPSMAP 1042xsv Works

One important aspect about this Garmin GPSMAP 1042xsv is that it also compatible with the Panoptix LiveScope system as well. Hence, distinguishing it form other similar fish finders. This Garmin GPSMAP 1042xsv makes use of the high-end sonar technology for finding the fish in water and is pretty efficient in this regard. So, these are the technologies that are involved in the working of this fish finder. 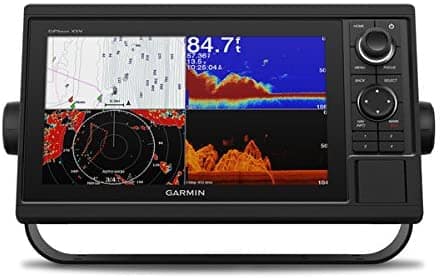 Now, we will account for the features that are present in this Garmin’s GPSMAP 1042xsv.

Referring to the display of this GPSMAP 1042xsv, it has a massive screen of 10.1 inches. However, one aspect that needs to be mentioned here is that the screen is not touch sensitive. Means that you can not control the screen through touch. It is not a touch screen rather, there is a keypad available through which, the contents of the screen can be regulated. Overall, the keypad interface also has knobs that are used for various controlling processes. Again, if we refer to the display, then this huge display of GPSMAP 1042xsv has a 1027×600 pixels resolution. Therefore, based on this, we can say that in terms of display, this GPSMAP 1042xsv is a wonderful chartplotter. It has no prominent drawbacks on the basis of its display. 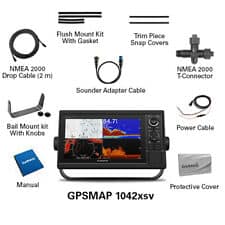 This Garmin GPSMAP 1042xsv comes with a built-in mapping system that is absolutely amazing. This device is equipped with both, BlueChart g3 as well as LakeVu g3 coastal charts. These are quite detailed maps that provide high levels of information to the fishermen. It contains detailed data on large number of lakes, rivers and even water reservoirs. Overall, in terms of mapping facilities, you will not be left behind by this Garmin GPSMAP 1042xsv.

This Garmin GPSMAP 1042xsv comes with three sonar technologies. It has a 1kW CHIRP technology along with the ClearVu and SideVu as well. Overall, we can say that these sonar technologies provide extremely detailed view of the surroundings of the boat and provide the fishermen with much detailed and clear pictures and data regarding to the presence of fish. Another important aspect is that this 1042xsv is also compatible and supports the Panoptix sonar as well. It also supports the Panoptix LiveScope sonar technology as well.

This is also an amazing feature that this Garmin GPSMAP 1042xsv has. Through this feature, a fisherman can record the sonar readings and can play them back afterwards in order to see that whether he has left some fishing spot or not. Furthermore, the fisherman can also mark that specific spot on the map and can upload it to the GPS for later verification.

This network sharing is also one of the prominent features of this Garmin GPSMAP 1042xsv. Through this feature, it allows the sharing of maps, data and information etc., to multiple units. Further, this 1042xsv also comes with a built-in Wi-Fi and ANT connectivity. These numerous connectivity options are definitely a plus point when you are fishing.

Now, if we account for the pros and cons of this Garmin GPSMAP 1042xsv, then I would definitely suggest that this fish finder is full of pros with nearly no cons. If we talk about the pros of this device, then it has a massive 10.1 inches of display that provides quite detailed information and charts. The transducer and sonar technologies involved in this are also amazing.

The ClearVu, SideVu and CHIRP technology provide quite detailed, crisp and clear visuals of underwater things around the boat. Different connectivity and network sharing options also make this device much useful. GPSMAP 104xsv is a fish finder with extensive number of maps and charts in it. It contains BlueChart g3 and LakeVu g3 that provide data about the water bodies in quite extensive detail. So, these are some of the pros relevant to this device.

Now, if we refer to the cons of this device, then I would suggest that the only con of this Garmin GPSMAP 1042xsv in my opinion is the lack of touchscreen. It would definitely have been a best buy if it has a touch screen. For screen navigation, there is a keypad available and it lacks a touch screen. This is the only main disadvantage of the Garmin GPSMAP 1042xsv in my opinion.

Therefore, based on the above discussion, what I conclude is that this Garmin GPSMAP 1042xsv is one of the best available fish finders in this category. It is definitely equipped with quite amazing and impressive features. I would suggest that if you are a fisherman who is absolutely okay with keypad-based screen navigation, then you should definitely give this Garmin GPSMAP 1043xsv a try. It will surely benefit you.