Having adequate knowledge about the habitat, feeding habit and spawning season of freshwater fishes would make your whole fishing expedition a cakewalk ( with enough practice and patience that is!)

To begin with the basics freshwater fishes come under one of the three following categories:

Warm water fish species: As the name suggests , these fishes can withstand a wide range of temperatures, they can withstand temperatures of about 80 degrees Fahrenheit. These include largemouth bass, bluegill, catfish, crappies, sunfish 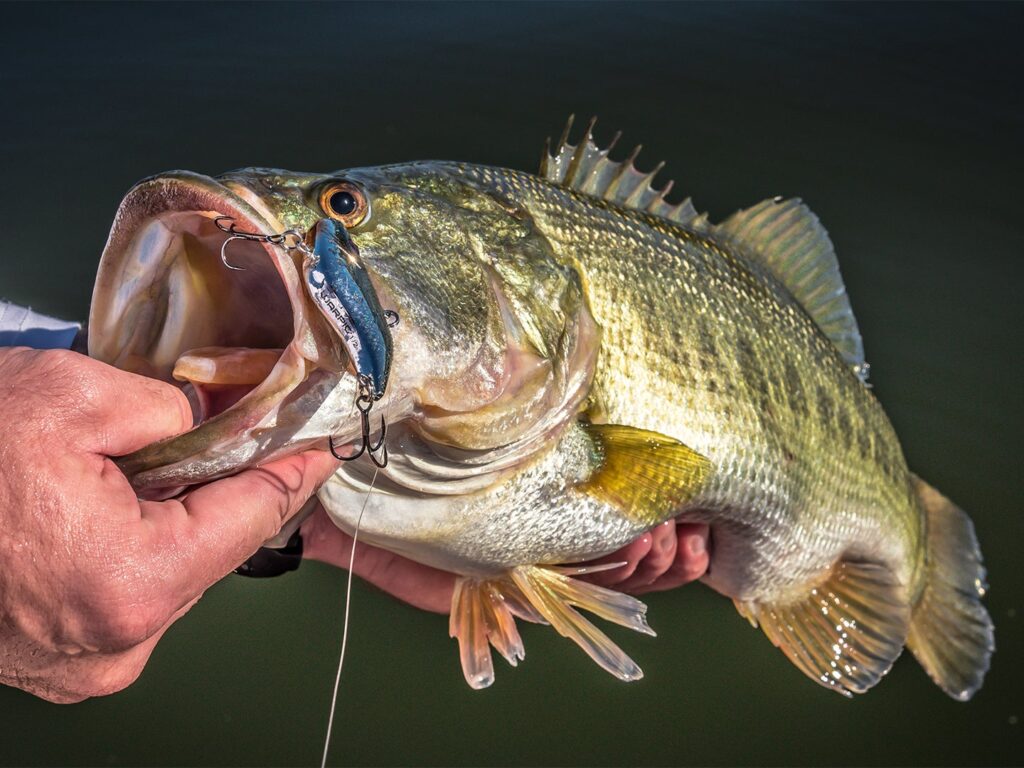 Largemouth Bass( Micropterus salmoides) belongs to Centrarchidae family,with a striking complexion . they are solitary, carnivorous fish making them the top predators in the aquatic ecosystem forming the apex of the aquatic-life food chain. They are found in rivers, lakes, ponds , streams and reservoirs.

The Largemouth Bass with it its greenish-gray complexion and horizontal dark lines running down on each side is a stunning aquatic creature and also happens to be the biggest of the black bass species. The most striking feature of the Largemouth Bass is its mouth where the upper jaw extends past its eye and lower jaw juts out past the upper jaw making them possess such enormous mouths.

They feed on a variety of smaller fish such as small baitfish, small shrimp, insects, and scuds, they grow they move on to fish such as bluegill, crawfish, frogs, snakes, snails, shad, little water birds, bats, and even baby alligators. The adult Largemouth Bass feed on shad, yellow perch, shiners, sunfish and younger members of larger fish such as catfish, trout, walleye, etc which are found in deep waters in reservoirs and ponds.

Largemouth Bass are most commonly seen in quiet, calm and warm water, hidden between rocks, under roots and limbs of sunken trees, among water vegetation. They are indigenous to eastern and central United States, Northern Mexico. They are found in other locations as well. 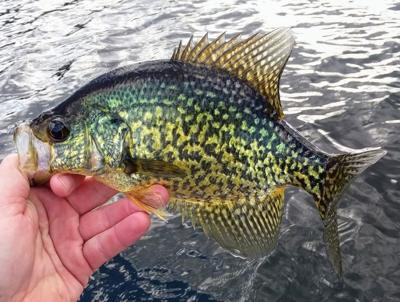 The black crappie (Pomoxis nigromaculatus) belonging to the sunfish family is a freshwater omnivorous fish, characterized and differentiated from the white crappie by its green to black random splotches on its silvery sheen body. Black crappie also spawns a little earlier than white crappie. These big black crappies are solitary fishes and can often been found under a cover such as vegetation, roots of aquatic trees, docks or any structure underwater.

The black crappies has 7 to 8 spines on its dorsal fin, has a much rounder body which makes it easier to be distinguished from white crappie

Black crappies grow to about 10.8 inches on an average with the highest recorded length being 19.3 inches.

Black crappie feed on planktonic crustaceans and free swimming, nocturnal, and larvae. Larger members basically feed primarily on small ﬁsh. Black crappie happen to share their feeding habit with walleye and are often found together in the same habitat.

Black crappie are less tolerant of turbid water than white crappie. During the summer they live in deeper water, while in the spring they occupy shallower water.

Adult black crappies are found in lakes(ranges from eutrophic  and highly fertile lakes, to dark water mesotrophic lakes to clear lakes)ponds, sloughs, backwaters pools and streams. Crappie prefer cover, such as such as vegetation, fallen trees or boulders. They often form schools in clear water among vegetation over mud or sand 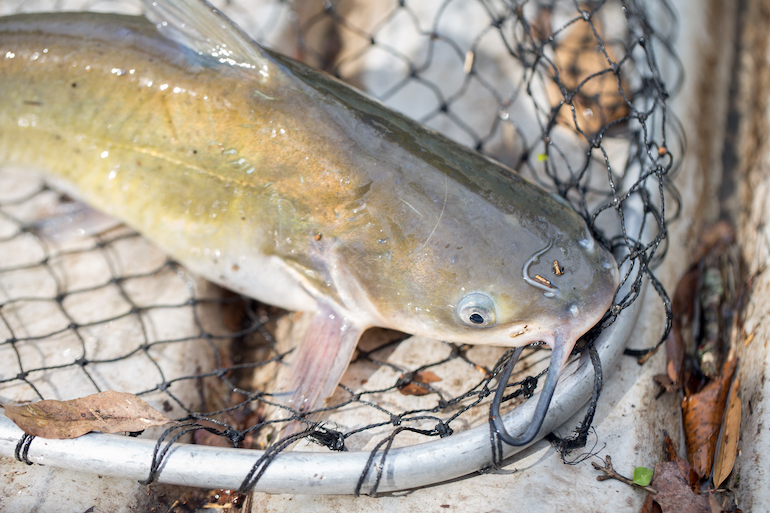 The channel catfish (Ictalurus punctatus) is a member of the family Ictaluridae.They are freshwater fish that inhabit rivers, streams, lakes and ponds in temperate environments. They appear olivaceous blue to off-white in color(ventrally), often dictated by the color of the water they inhabit.In clear water they seem almost black while in muddy water they appear as a slight shade of yellow.

The younger members of this species have spots distributed irregularly on the sides which disappear on growing. The body of the channel catfish is slender and scaleless, with a gently sloping dorsal profile anterior of the dorsal fin. It is white to silvery on the undersides, bluish olive, gray or black dorsally.the channel catfish consist of sharp spines in their pectoral and dorsal fins.

The optimum temperature for channel catfish to grow is 24-30 oC, although they can tolerate a wide range of temperatures and environmental conditions.

One unique feature of the channel catfish is the presence of taste buds found all over the external surface and inside of the mouth, pharynx and gill arches of it. They primarily detect food with their sense of taste. In clear water, eyesight can be an important means of finding food. However, in turbid water, taste is the primary way catfish locate food.

They feed on both plants and animals, during the day or night and most commonly found near the source of food, like near the bottom of natural waters. Young catfish feed majorly on aquatic insects while adults have a more diverse diet including insects, snails, crawfish, green algae, aquatic plants, seeds, and small fish. They also feed on terrestrial insects when available.

Channel catfish which are freshwater fish, prefer clear water streams but are also found in muddy water. They are more likely to be found in streams, large reservoirs, lakes, ponds. They are often seen at the bottom where it is sand, gravel or rubble. They can also thrive in brackish water.

Channel catfish were originally found in the northern borders of Canda, Mexico, along the Gulf states and the Mississippi Valley. They are distributed widely across North America and rest of the world.

One can expect to find the channel catfish in areas where it takes cover under rocks, logs or any form of rubble or vegetation. Young channel catfish feed in shallow riffle areas just above pools, cut-banks, snags, rocks and other submerged structures in streams. Adult channel catfish feed in deeper water immediately downstream from sand bars. During the day they’re usually found in deep holes, rarely moving around to find feed, the younger fish move around extensively to find prey especially during night time,

Rainbow trout (Oncorhynchus mykiss) belonging to the family of Salmonidae commonly called the redband trout with their gorgeous colors and patterns often seen in blue-green or yellow-green shades with a dash of pink-red stripes on their sides , white underbelly and black spots on their back and fins.

The Rainbow trout has a an elongated, laterally compressed body, differentiated from fellow trout family by the presence of a thickened adipose fin found in between the dorsal and caudal fin.Coloration varies with habitat, size, and sexual condition. The ones found in streams and spawners are darker, with colours more intense whereas the ones fund in lakes and anadromous forms are lighter, brighter, and more silvery.

The rainbow trout are native to the rivers and lakes of North America, particularly the ones west of the Rocky Mountains.They feed on an extensive range of diet inclusive of zooplankton,insects (airborne and aquatic), salmon eggs, leeches, crayfish, snails.

The largest anadromous individuals can grow to over 1.2 m in length and 25 kg in weight, but 60 cm is a more common), and a weight of 10 kg a more common maximum. Adult freshwater stream rainbow trout average between 0.5 and 2.5kg; mature inland redband trout of less than 2kg are common Cultured O. mykiss are usually harvested at 0.6-0.7 kg in freshwater or 4-5 kg in marine cages.

One is more likely to find a rainbow trout in fast moving waters of rivers, dams, lakes along the western parts of Canada, USA, Mexico. It is also found distributed widely across the world. Rainbow trout love running water and sometimes the faster the better. They will lay in sections of fast water that you would not expect a fish to be in and they love traveling upstream into the current.

It is a common belief with anglers that they have better fighting ability than that of the brown trout. When hooked the run very fast and they generally don’t give up easily sometimes spending more time out of the water than in it. 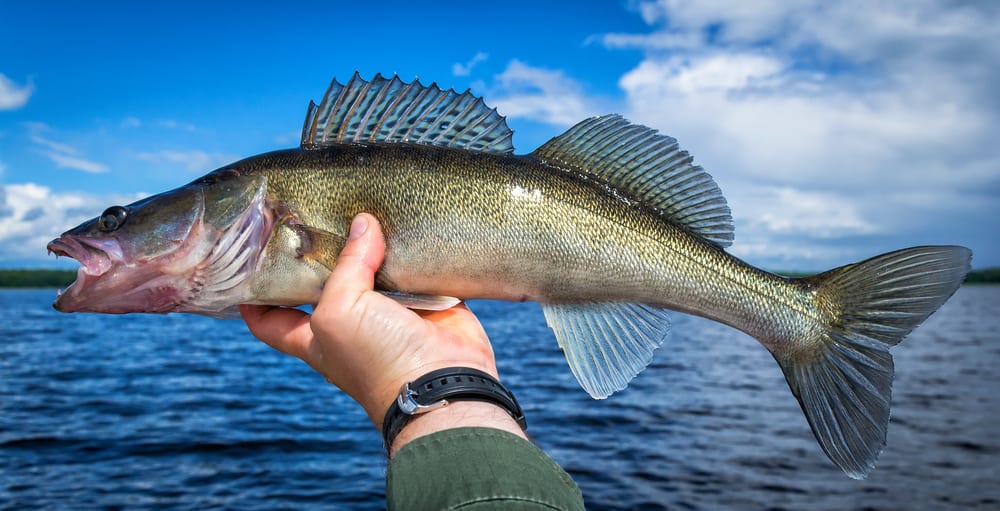 The walleye(Sander vitreus) largest member of the perch is a freshwater fish in the perch family that is a popular and commonly-stocked game fish. They are so named for its opaque, cloudy-looking eye due to the presence of a reflective pigment which helps in its night vision and prey-hunting.

The long and thin, torpedo-shaped fish ranges from dark olive brown to yellowish gold, its sides often marked with brassy flecks. It has a large mouth and row of sharp teeth.

Walleyes grow to about 80 cm (31 in) in length, and weigh up to about 9 kg (20 lb). The maximum recorded size for the fish is 107 cm (42 in) in length and 13 kilograms (29 lb) in weight. Most catches are 14-17 inches and weigh about 2 pounds. The rate of growth depends on the habitat, diet and environmental conditions. In general females growth faster and larger than the male counterparts.

The walleye are indigenous to Canada, the Great Lakes, the Missouri River basin and the upper Mississippi River basin, and recently introduced in the western and northeastern United States. They are usually found in the deep waters if quiet lakes, rivers and reservoirs.

Walleye feed on what is available in their habitat, preying mostly on small fish, large invertebrates and insects, they mostly eat minnows, but leeches, small bullheads, nightcrawlers. They have very good vision in the dark, hence they majorly hunt for prey during dusk and dawn.

Walleyes are easily distinguished from other fish by their golden color, and the white tip at the end of the lower half of their tail fin.

Walleye are schooling fish and are more likely fund along the shorelines and in shallow bays where they hunt for small fishes to prey on. As mentioned before Walleye are seen in deep, cool, quiet waters of lakes, rivers and reservoirs. Dawn, dusk and any time after sunsets is the preferred time to catch these light-sensitive fishes as this is when they set out to the shallow waters to hunt for small fishes.

They can be found under cover of some structures as such logs, rocks, aquatic plants and roots during the day. Stream inlets or outlets are also good spots, but look out for thin ice.