Passionate about fishing you are at the right place. Here we will try to point you in your choice of sonar and especially the option Side Imaging (SI). It is quite difficult to choose a sounder that suits us. Indeed the technical characteristics of these devices can for some seem abstract. In addition, depending on the type of fishing you practice, you will sometimes look for a poll that will be different from your neighbor’s. But do not worry, we go through our guide trying to explain to you in a simple way the operation of the sounders and give you some important point to look at when you want to buy this equipment and you are lost between the Humminbird or Lowrance?

The advantage of this system of lateral scanning with 3D representation is that it allows to sweep very far on the sides with a representation of the relief on the screen which gets rid of the famous zone of shadow, principal factor limiting the systems classical survey.

This is purely a system for locating and identifying remote structures, which is closer to sounder than sonar. Side Imaging is now installed on high-end models of the brand Humminbird, Lowrance and coupled with a GPS.

Clearly, it is now possible to quickly survey a wide area on each side of the boat, get an idea of the slope, the presence of obstacles several tens of meters apart, and even “read” the winding path of a riverbed submerged under 15 meters of water.

Remote fish or schools of fish can also be detected remotely without reaching the accuracy of a conventional fish finder for fine details.

The principle Side Imaging 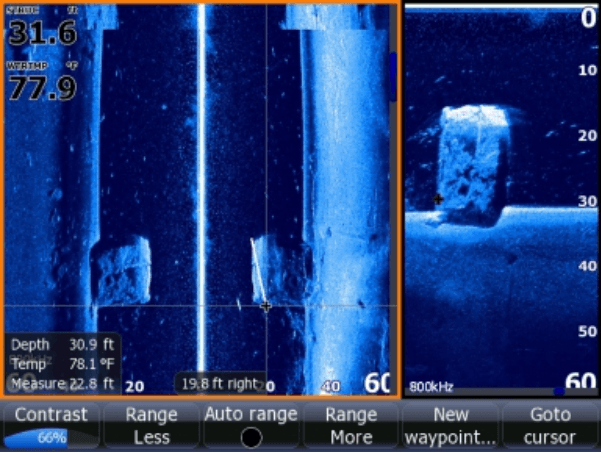 Two side beams sweep on the sides, with a theoretical range of more than 120 m each.

Unlike conventional conical-shaped beams, Side Imaging beams are very thin in their horizontal dimension, but very wide in their vertical dimension. They behave a little like acoustic curtains that we would walk at right angles to each side of the boat. To obtain a good lateral image, it is important for the boat to move at a constant speed (between 4 and 8 knots), preferably in a straight line to avoid distortion.

Backing up funds, hard bottoms, objects well separated from the bottom return stronger echoes that are displayed in clear.

Bottoms that go down or soft bottoms appear dark.

Moreover, if a high obstacle (clear echo) intercepts the beam, it creates behind it a shadow zone that does not receive waves, so it does not send back. This area is displayed in dark.

More extensive if the obstacle is important, it looks like a shadow, like that of an object subjected to a grazing light.

Humminbird is a sounder manufacturer. The brand is well known in the marine environment and fishermen are very fond of the devices provided by this company. It is closely competed by the Lowrance brand which is also in this field. The Himminbird brand has importers who offer the sounders with an after-sales service. For this brand, there are several customer reviews that affect both the sonar, but also the importers and their after-sales service.

Humminbird has released several kinds of sounders that are scattered in several series namely the HELIX series, the SOLIX series and the PIRANHA MAX series. These series are the accessories that make Humminbird sounders unique and powerful. These pollsters are appreciated by all fishermen because the brand has a modern vision of fishing. The accessories in these series are so practical and futuristic and learning becomes easy and fun. There are sounders equipped with a touch screen, a GPS sensor, a Bluetooth, a radar, a multifunction handset … The fishermen speak highly on the HELIX series which is very suitable for deep waters. For the SOLIX series, users are very fascinated by the size of its 12 “or 15” screen as well as the quality of the image proposed with the Autochart application, which makes it possible to save custom mapping. Finally, for the PIRANHA MAX series, the positive reviews are focused on its basic use and its very affordable price. Indeed, this model is generally intended for modest fishermen.

These three series are certainly very popular in the field as they cover the major use or elaborate search in a fishfinder, however, these devices have some small drawbacks that are strongly criticized on the net. For the HELIX series, the frequency it uses is slightly below that of its opponent Lowrance Elite. For the SOLIX series, since it manages to compete perfectly with the other brand, its price is quite high. This makes it less attractive at the commercial level. For PIRANHA MAX, as a sounder for a small budget, this device is often indicated as a low-end device with very little offer to offer. These are almost small details, because the negative reviews of Humminbird cameras are more at the level of fogging on the screen that are usually unavoidable.

Side Imaging: the reality

The ability to work on a frequency of 1200 kHz (against 455 and 800 kHz before), which offers unparalleled accuracy until now in shallow depths.

the ability to modulate the scanning frequency (CHIRP), which further improves on-screen rendering and target discrimination. 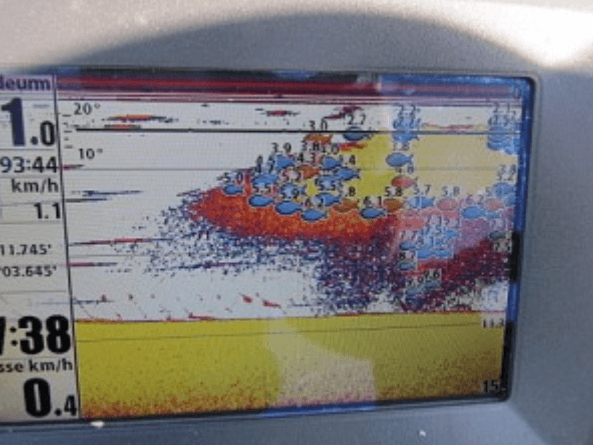 With the Side Imaging, an interesting structure can be found several tens of meters from the boat, in a rather imprecise direction, and the boat moves quite fast.

Finding it might take a long time without the GPS. Fortunately, it is possible to position the cursor where we are interested on the screen, to memorize it, and to ask the GPS to take us there.

It does not matter if the boat has traveled 100 m in the meantime: the sonar memorizes the positions as long as they appear on the screen.

This is diabolical, because even if the precision did not seem dazzling to me, this combination allows to find the structure in question in record time. It is not enough to say that we are not stopping progress: 10 years ago such a system would have been unthinkable, at least for a public application (in reality this system, much more powerful and perfected, is used in underwater cartography).

In other words, the definition depends on the number of horizontal and non-vertical pixels. If we consider that we probe at great distances (up to 220 m in all) with consequently high scales, this system is very greedy in pixels, and a small screen is a handicap.

We can work around this problem by choosing to display only one side, which multiplies the definition by two. 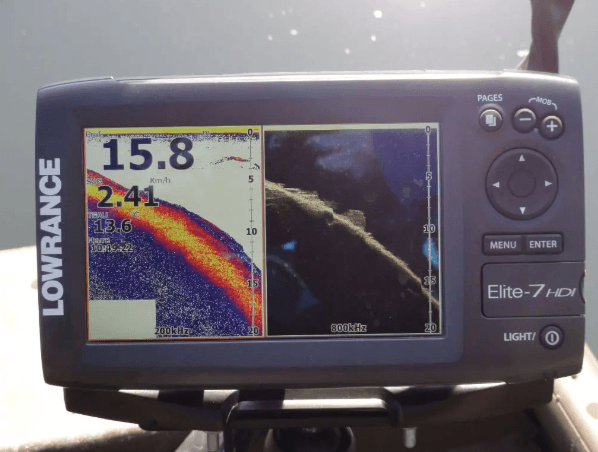 SCAN STRUCTURE: This feature brings 3D vision (top view) to your depth sounder. This is the equivalent function of the Humminbird Side Imaging at Lowrance.

True-to-life 3D surveys can be displayed on the LOWRANCE HDS Gen series plotters / sounders when used with the Side Scan 3D skimmer and the Structure Scan 3D module.

It is available if you have an HDS (non-M) and if you have a special Structure Scan probe. This will allow you to see up to 150 meters on each side of the boat, and 100 meters vertically under the boat

Another warning: if you do not have a HDS “Touch”, for example all HDS generation 1 or Gen 2 (non touch), you must have the LSS box to be placed between the LSS probe and your sonar. To know especially on the second hand market, because if you buy nine we can only advise you to take a “touch” more convenient. The digit indicates generation, so an LSS1 probe is suitable for an HDS gen 1, the same for both.

HDS: HDS is a Lowrance sounder with several options (Gen2 / Touch / M) and screen sizes (5/7/8/9/10/12 inches). It is the high end of the brand that receives all the latest technologies of the moment. These are the only Lowrance that can display the Scan Structure (equivalent 3D vision to the Humminbird Side Imaging).

The Lowrance Structure Scan 3D comes with a 6m Ethernet cable and all documentation in French.

GEN 2: these letters simply indicate that the sonar was released after 2012 (generation 2) and thus benefits from the changes in the brand compared to the “Gen 1” (processor / software / clarity / sharpness etc.)

T: or “TOUCH” indicates that the screen is touch. Very useful for placing your GPS point on a large Structure Scan screen without moving a cursor by clicking 40 times on the left or right arrow. Another important point of the “T” echo sounders is that you can directly connect the Structure Scan probe to the sounder. If you have a non-T HDS you need an intermediate box (LSS-2) between the display and the LSS-2 sensor to take advantage of the Structure Scan function.

The range “Touch” dating from 2013, a device “Touch” is necessarily Generation 2.

– compact and very smart devices, easy to mobilize and manipulate 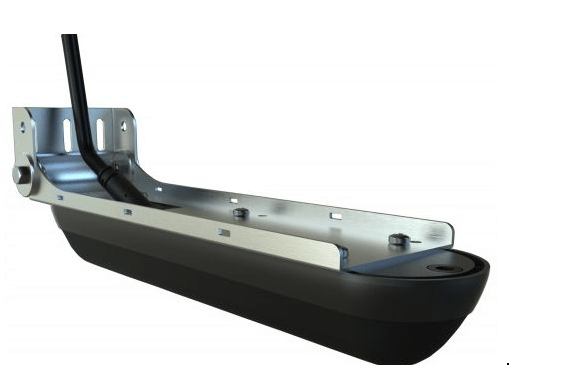 The Side imaging or Structure Scan: Humminbird is integrated while at Lowrance you have to buy a particular box. So much cheaper at Humminbird unless we use several sonar connected ethernet.

Interesting detail at Lowrance, the probe is delivered separately, so count more expensive for a complete kit.

The Humminbird for its practical side, each son meets on a large compact plug that secures by screwing. On the Lowrance it is necessary to connect several cables and look each time by turning slowly the good position of the plug which locks. So the Humminbird is easier.