How to Catch Wallaye fish

Walleye are a popular , highly prized fresh water fish for the fish catching experience happens to be an exciting and challenging one, in addition to its tasty, nutritious white meat making it one of the most sought after game fishes. Walleye can be a challenging fish to target, but that’s what makes them so enticing making hundreds of anglers and fishermen go after this particular kind every year during the season.

The walleye is named for its opaque, cloudy-looking eye, which is caused by a reflective layer of pigment called the tapetum lucidum. This layer helps it (and other nocturnal animals) see in low light.

About the Walleye fish

The walleye(Sander vitreus) largest member of the perch is a freshwater fish in the perch family that is a popular and commonly-stocked game fish. They are so named for its opaque, cloudy-looking eye due to the presence of a reflective pigment which helps in its night vision and prey-hunting.
The long and thin, torpedo-shaped fish ranges from dark olive brown to yellowish gold, its sides often marked with brassy flecks. It has a large mouth and row of sharp teeth.

Walleyes grow to about 80 cm (31 in) in length, and weigh up to about 9 kg (20 lb). The maximum recorded size for the fish is 107 cm (42 in) in length and 13 kilograms (29 lb) in weight. Most catches are 14-17 inches and weigh about 2 pounds. The rate of growth depends on the habitat, diet and environmental conditions. In general females growth faster and larger than the male counterparts.

The walleye are indigenous to Canada, the Great Lakes, the Missouri River basin and the upper Mississippi River basin, and recently introduced in the western and northeastern United States. They are usually found in the deep waters if quiet lakes, rivers and reservoirs.

Walleye feed on what is available in their habitat, preying mostly on small fish, large invertebrates and insects, they mostly eat minnows, but leeches, small bullheads, nightcrawlers. They have very good vision in the dark, hence they majorly hunt for prey during dusk and dawn. Walleyes are easily distinguished from other fish by their golden color, and the white tip at the end of the lower half of their tail fin.

Where to find walleye

Walleye are schooling fish and are more likely fund along the shorelines and in shallow bays where they hunt for small fishes to prey on. As mentioned before Walleye are seen in deep, cool, quiet waters of lakes, rivers and reservoirs. Dawn, dusk and any time after sunsets is the preferred time to catch these light-sensitive fishes as this is when they set out to the shallow waters to hunt for small fishes.

They can be found under cover of some structures as such logs, rocks, aquatic plants and roots during the day. Stream inlets or outlets are also good spots, but look out for thin ice. 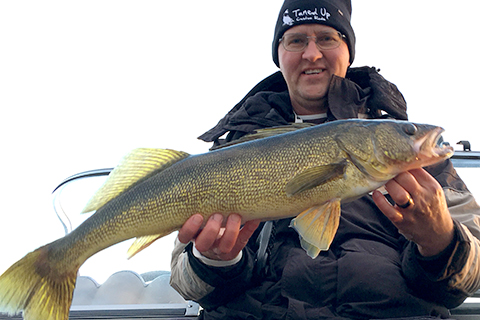 Live Bait is the key to bountiful Walleye trips. Especially if you’re a beginner then going for live baits is sure to ease your first-time-fishing-Walleye experience.

Minnows(shiner), nightcrawlers and leeches are the most common live baits used to catch Walleyes.

There is a time and place for Crankbaits and Soft Plastics, albeit these are typically more advanced and are generally used to weed out the eater Walleye and target trophies. Live Bait is the best option when you’re first learning how to catch Walleye.

How to catch a Walleye

Tip-ups rigged with minnows are the best way to attract Walleye. The walleye would come up from the bottom and attack the bait, when the line tugs again after giving it about 5 minutes to come around and eating it, set the hook with a yank and feel the resistance and the subsequent fight it puts up. Work the fish to the surface and get out your gaff hook.

One can also use a monofilament line on a jigging rod,allowing you to catch several walleye at once since you don’t have to rebait the hook each time.

Low-light hours such as early mornings and evenings happen to be the peak hours when one can catch walleyes.
One of the best is a live-bait rig, which allows anglers to troll a leech, minnow or nightcrawler slowly along the bottom. These rigs include:

During summer they are fund under the cover of thick vegetation, sunken islands, rocks, logs. They remain hidden in weeds when the sun is up and bright, only when the sun sets they set out to shallow waters to hunt for prey.

They move from their spawning areas during the early part of June into deeper parts of the water where they’d spend their summer. In the fall, walleye feed heavily in advance of winter, they move around a lot in search of food. Deep water near structure is a good place to locate hungry fall walleye.

Walleye can be less active during the winter months, but they will feed on the tops and edges of structure and around vegetation that remains green through the winter.

Walleyes generally spawn during early spring or late winter along the shallow waters along the shore , laying eggs over gravel, rock, rubble in temperatures of about 6 to 10 °C (43 to 50 °F). A large female can lay up to 500,000 eggs (on an average a female walleye lays more than a 100,000 eggs), and no care is given by the parents to the eggs or fry. The eggs are slightly adhesive and fall into spaces between rocks in waters as deep as 1-6 feet. Spawning reaches its peak when water temperature ranges from 42 to 50 degrees
Depending on weather, the success of spawning can vary greatly year to year. Rapidly warming water can cause eggs to hatch prematurely. Prolonged cool weather can delay and impair hatching..
After spawning, walleye move to feeding areas which are cooler areas of the water body away from the sunlight.

Beginning your fishing hobby by catching a Walleye would be a fun, thrilling learning experience and would boost your confidence to catch other game fish. Here’s wishing you a happy Walleye fishing!