How to catch Rainbow Trout

Catching a rainbow trout is every bit as scenic as the name would suggest with its silver shade and vibrant color on its body, which makes it one of the most elegant looking game fish, not to mention one of the easiest to catch of all the trout. They are most commonly seen in lakes and rivers and popular amongst fly fishermen. Rainbow trout make a jump when hooked and are a fun adversary on light tackle.

About the Rainbow Trout

Rainbow trout (Oncorhynchus mykiss) belonging to the family of Salmonidae commonly called the redband trout with their gorgeous colors and patterns often seen in blue-green or yellow-green shades with a dash of pink-red stripes on their sides , white underbelly and black spots on their back and fins.

The Rainbow trout has a an elongated, laterally compressed body, differentiated from fellow trout family by the presence of a thickened adipose fin found in between the dorsal and caudal fin.

Coloration varies with habitat, size, and sexual condition. The ones found in streams and spawners are darker, with colours more intense whereas the ones fund in lakes and anadromous forms are lighter, brighter, and more silvery.

The rainbow trout are native to the rivers and lakes of North America, particularly the ones west of the Rocky Mountains. They feed on an extensive range of diet inclusive of zooplankton,insects (airborne and aquatic), salmon eggs, leeches, crayfish, snails.

The largest anadromous individuals can grow to over 1.2 m in length and 25 kg in weight, but 60 cm is a more common length (Froese and Pauly, 2021; ISSG, 2021), and a weight of 10 kg a more common maximum. Adult freshwater stream rainbow trout average between 0.5 and 2.5kg; mature inland redband trout of less than 2kg are common (Behnke, 2002). Cultured O. mykiss are usually harvested at 0.6-0.7 kg in freshwater or 4-5 kg in marine cages.

Where to find Rainbow trout?

One is more likely to find a rainbow trout in fast moving waters of rivers, dams, lakes along the western parts of Canada, USA, Mexico. It is also found distributed widely across the world. Rainbow trout love running water and sometimes the faster the better. They will lay in sections of fast water that you would not expect a fish to be in and they love traveling upstream into the current.

It is a common belief with anglers that they have better fighting ability than that of the brown trout. When hooked the run very fast and they generally don’t give up easily sometimes spending more time out of the water than in it. 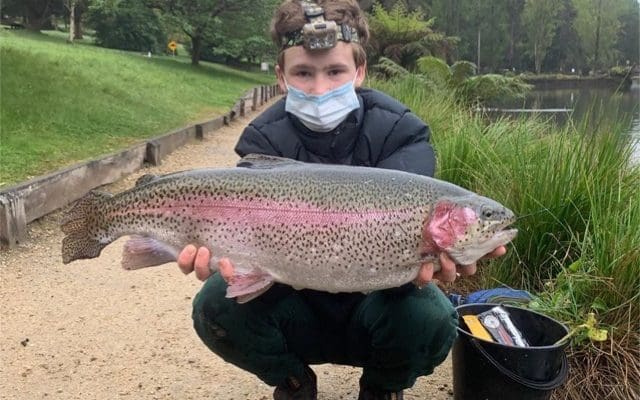 There’s plenty of bait options one can chose from to lure these rainbow trout. The trick is to match the baits with what is available in that particular region. . If you can use something of similar size or colour then that’s a good starting point. Try mixing up how you fish them from fast to slow and with aggressive twitches and even letting the plastics bounce off the bottom. It will depend on what sort of mood the fish are in as to how they react.
Some commonly used baits for Rainbow trout include:

Critters and bugs: as mention earlier trout feed on insects and bugs making them one of the most easily available and useful baits. Grasshoppers, beetles, crickets are some commonly used baits.

Tunes or Grubs: these imitate zooplankton and are useful in luring the trout

Soft plastic swimbaits: the adult trout love to feast on smaller baitfish, the paddletail swimbait makes for an easy way to lure them big trouts.

Soft plastic worms: these are some of the most popular and easy to procure , are a great choice for trout.

Crankbaits: may not be the first choice for trout but can be a good substitute.

Salmon eggs: Trout are notorious scavengers, raiding spawning beds of other fish constantly to feed on their eggs. Hence salmon eggs can be one of the most promising baits out there for trout.

Spoons: flashy spoons with feathers,wax worms are effective for luring trout. They thrive, however, in colder weather when the bite slows down. Their flashiness can annoy and entice into a bit bite.
Spinners: spinners are some of the must—haves when fishing trout, their flapping vblades and bright color makes it easier to lure trout.

Powerbait: in strong colors are a go-to when fishing for trout.

How to catch Rainbow trout?

Trout fishing gear include a 1-3kg rod with either a 1000 or 2500 size reel which is at least 6-7 feet long. The selection of line size based on where you are fishing and the size of the fish, but generally anything from 4-10lb is preferred.

Rainbow trout can be seen lodged under structures such as logs, roots or any kind of cover, so casting a line in areas you find these structures is advised. Streams or rivers with fast flowing waters are where one would most commonly find rainbow trout. You will find them in areas you least expect , and often they move as a school of fish hence resulting in a bunch of fish being caught at once.

Make sure to choose a hook size to suit the size of the plastic. Choose the lightest of baits, barrel sinker or ball sinkers are preferred. When using lures you can use clips to attach your lures. There are several available and the benefits of these are it enables you to change lures faster rather than retying. Trout don’t seem to mind clips, but try and use as small as possible. Size 00 are generally rated to around 18lb so they are ideal.

They have soft mouths and it is easy to pull the hooks if you have your drag too tight the make sure to patiently wait. A loose drag is a must and its important to wear the fish down rather than just try and get them in as quick as you can.

Rainbow trout spawn only once a year,under optimum temperature and conditions. Some strains of the rainbow trout spawn twice or thrice a year with different spawning season for each strain. They usually spawn on a bed of fine gravel in a riffle above a pool in well-oxygenated shallow waters.

It’s the female trout that clears the gravel bed to lay eggs which get lodged in between the grains of gravel. A female rainbow trout lays about 2000-3000 eggs per kg of weight. The male trout then moves along the laid eggs to fertilize them which then hatch about 4-7 weeks after.The growth rate of the rainbow trout depends on the habitat, temperature and quality and quantity of food.