The ladyfish is a widely distributed and one of the easiest catches. Commonly called “trash fish” they are known for their use as baitfish for the larger fishes such as sharks, bull reds, tarpon, snooks.

They have a large deeply forked tail or caudal fin with long,slender symmetrical lobes. They have a small, pointed head with large mouth and eyes. They have sharp, small teeth with a gular plate between the two jaws. 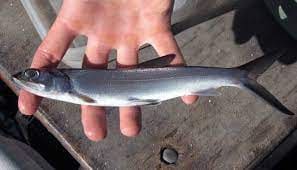 On an average the ladyfish grow up to 1 metre (3 feet) and weigh about five pounds can even go up to 15 pounds.

Where to find lady fish

The Ladyfish can be found along Gulf of Mexico as well as the western North Atlantic Ocean from New England to Florida. They are also found in Bermuda, the Western Atlantic, and the south of Brazil. Some records show that they are also found in Asian countries like Vietnam, Taiwan, and China.

You can find plenty of ladyfish off piers, along beaches, and in the bays. Owing to their tolerance to low saline waters one can find them in inshore waters as well.

They are also tolerant of low salinity waters, so you can sometimes catch ladyfish from inshore waters as well.  My preference is to cast for them in the surf. That way, you also have an opportunity at all manner of fast swimming species.

Some of the best live baits for ladyfish include Live shrimp, cut bait, hair jigs, spoons, jerkbaits, bubble rigs, and Mirrodines . They will eat all sorts of baits and lures, particularly those that mimic small silvery fish. Some of the artificial lures best suited for ladyfish are plugs, spoons,streamer flies bubble rigs and soft plastics. 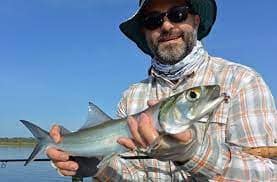 How to catch lady fish

A 1500-5000 size spinning reel on a 7-9 foot rod with a fast tip is recommended for catching the ladyfish. Clear monofilament line is suggested as the ladyfish jumps and leaps out of the water.
1-2 feet of 30 pound heavy mono leader with 12-15 pound main line can be used. Fly fishing, surf fishing, spin casting,drift fishing,bait casting, still fishing are the commonly employed techniques to catch the ladyfishes.

One easy way to locate ladyfishes is by finding diving birds, birds working on the surface or bait surfacing, cast just outside the school of bait stay far enough to be able to cast but not so far as to lose sight of the bait. When hooked the ladyfish starts to leap and thrash wildly in the air giving it it’s nickname “poor man’s tarpon”.

If you don’t catch on the first bait, cats again. Bouncing a jig off the bottom is a great technique if you can reach the bottom such as in the grass flats. Ladyfish don’t generally take off running and they won’t spool you but they will put up a fight between the end of the line and the reel.

Ladyfish can be found year-round but the location varies according to season. In spring, the fish are more commonly found throughout estuaries and bays that have modest salinity.
In summer, they move to the deeper waters to escape the harsh sunlight. early in the mornings they swim to the shallow waters in search of prey, commonly between the grass.

Tips on how to catch lady fish