Jack Crevalle or Crevalle Jack are large saltwater fish largely found in the subtropical and tropical regions , a well known game fish popular for the spectacular fight they put up during fishing. They go by various names such as common jack, black-tailed trevally, couvalli jack or yellow cavalli.

The crevalle jack (Caranx hippos) belongs to the Carangidae family of fishes. These slender, compressed fishes with their silvery bodies, might also appear greenish-bluish-black, pale yellow underbellies and enlarged scales have a sickle-shaped deeply forked tails. The chest of the fish is scaleless. A distinct black spot on the lower base of the pectoral fin and one another dark spot on the gill cover is seen. Juvenile jack crevalle fish have five dark stripes along the sides.

The jack crevalle fish have small , blunted face , steep forehead and large eyes. These fish are known for their habit of moving in schools and their quick strike on the prey/smaller fish. These jack crevalle being the voracious predators that they are feed on a variety of smaller species of fishes, shrimps, crustaceans and those available locally in their habitat. 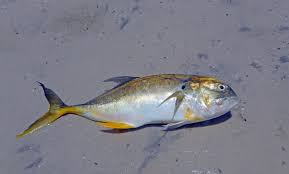 Where to find jack crevalle

The crevalle jack is distributed across the waters of the Atlantic Ocean, ranging from Nova Scotia, Canada to Uruguay in the west Atlantic and Portugal to Angola in the east Atlantic, including the Mediterranean Sea.

Jackfish can be found along shore reefs, harbors, and protected bays. Smaller ones can be found over muddy bottoms in very shallow water such as rivers and estuaries. Adults swim deeper at around 130 feet underwater but move to cooler and deeper water in summer. You can find bigger ones inshore during the fall when the mullet are migrating in large numbers.

The jack crevalle on an average grows to about 60 cm, weighing 35 Kg normally. The maximum known length is about 124cm weighing about 54 pounds.

Live baits commonly employed for jack crevalle include mullet, herring, pilchard fishes.
Artificial baits such as topwater plugs, spoons, fast-whipped jigs crankbaits and swimbaits and bucktail jigs are some of the best choices for luring these jack crevalle fishes.

Small jacks found on the shallow flats can take up any sort of live or dead baits,artificial baits. The biger ones prefer their prey which are fast-moving , hence use frisky live fishes as baits, or retrieve the artificial baits with a loud noise rapidly.

How to catch jack crevalle

One can use spinning, fly-fishing or surfcasting techniques to catch the jack crevalle fish with live bait such as pinfish or mullet.

A 7 foot medium action spinning rod with a 2500-3000 series reel will do well for jack crevalle fishing in most inshore finds. Heavy spinning tackle or medium conventional tackle is better suited to fishing for jack crevalle in tight quarters. A 3/0 circle hook is recommended.

One of the easiest ways to locate the most productive spot to catch your Jacks is to look for places in the water where the birds flock , this is because these fishes push baitfish to the surface and the birds attack from above are usually picked up by birds as prey. Hence areas where birds flock the water body is a good place to begin with.

They are attracted to fast-moving baits and they enjoy the chase. Cast the bait over and away from the school, and then retrieve it rapidly. If you are fishing in deeper water, quick and aggressive jigs will be effective. If they are closer to the surface, sight casting with topwater plugs is the recommended method.

Jigs are a great artificial lure to use when drifting the flats. Most of the time the water depth will be ten feet or less. A 1/4 ounce to 1/2 ounce jig is sufficient for this purpose. Most often anglers come across the jack fish while fishing for reds, trouts, flounder, striped fish.

These jack crevalle fish can be found year around, found along with other saltwater fishes. There is no particular preferred season for these fishes. During the Spring and Fall season when the water temperatures aren’t extreme one can find these fishes out in the shallow waters and in large numbers making it a good haul. During their spawning season is a good time to find them near the shores.

Tips on how to catch jack crevalle