Mangrove snapper are one of the popular and sought after fish, known for the great fight they put while being caught and also have some of the finest meat. The mangrove snapper (Lutjanus griseus) also known as gray snapper belongs to the Lutjanidae family. They are known by a variety of names such as black pargue, black snapper, gray silk ,gray snapper; lawyer,mangrove pargue, mangrove snapper, pargue, silk,snapper.

Mangrove Snapper are generally gray in colour with darker dosal and tail fins , some of them show a bronze shade, some might even have spots and pale bars on their body. Based on their habitat, age the tip of their fin changes colour.

They have a slightly concave head, long and pointed snout with sharp teeth. Rows of scales are present on their backs and lateral. Their scales have orange-brown spots in the center giving the impression that the body is striped.

Dorsal profile of head slightly concave, snout long and pointed. Preopercular notch and knob weak. Scale rows on back parallel to lateral line anteriorly, but rising obliquely posteriorly, below soft part of dorsal fin. Young specimens with a dark stripe from snout through the eye to upper opercle and a blue stripe on cheek below eye. 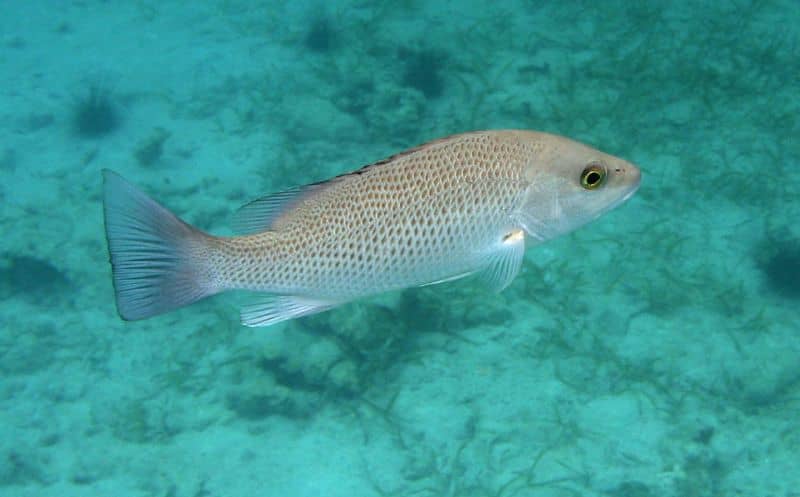 They on an average grow between 10-14 inches and weight between 1-2 pounds inshore.The maximum recorded lenght of 89 cm (35 in). The greatest recorded weight for this species is 20 kg (44 lb).

Where to find mangrove snapper

The Mangrove snapper is native to the western Atlantic Ocean from Massachusetts to Brazil, the Gulf of Mexico, Bermuda, and the Caribbean Sea. They are found in a wide range of habitats such as freshwaters, brackish waters. As their name suggests they are found around mangrove trees and prefer to take shelter in beach piers,inlets,bridges and docks, rock piles,oyster beds,deep holes. Offshore they are primarily found around reefs and wrecks 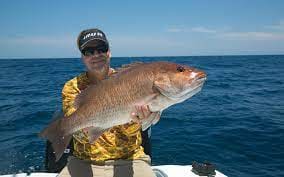 How to catch Mangrove Snapper

since the mangrove snapper fish hardly grows beyond 2 pounds, a regular saltwater rated gear will work best. A light spinning reel with a medium light action rod with a braided line would be a good choice to catch these fish. Fluorocarbon leader is preferred given its abrasion resistance and toughness.

Look for these mangrove snappers in region where there are cover structures. The most productive areas for catching these fish will be with cover and current. They take cover under piers, mangrove trees and other vegetation, bridges, rocks, rubble.

Cast the bait adjacent to these structures. It is important to remember that they are subtle eaters and can remain absolutely still while eating the bait. So look out for even the subtlest of tugs in the bait line. On days that the fish are hitting very lightly, reduce the size of your hook and the weight.

This will not only make the hit easier to detect but will also encourage the fish to eat faster because of less resistance. While using circle hooks do not use the upward jerking motion, instead just give a slight upward motion and reel in the line.

The mangrove snapper fish move to the shallow waters during their spawning season which happens to be during the summer. At that time, one has a higher chance to catch big grey snappers. These fish can be caught all year round too, but a mentioned earlier your chances of getting a bigger game fish are in the summers.

Tips on how to catch Mangrove Snapper