How to catch Channel Catfish

Channel catfish are some of the most sought after game fishes, for these “river monsters” are one of the top predator fish, feeding on almost anything and everything that comes its way, growing to enormous sizes making them a jackpot find during fishing expeditions.

These huge fish put up a rather feisty fight making the whole fishing a catfish experience adventurous. There are three main types of catfishes : the blue catfish, the flathead catfish and the channel catfish, out of which the channel catfish is the most popular one sought after by many anglers. They fight hard (put up the hardest fight amongst the three) and make a good fish fry 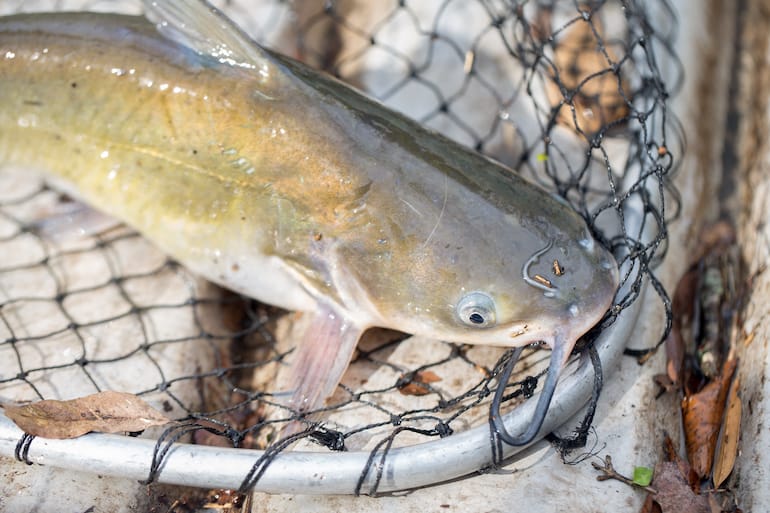 The channel catfish (Ictalurus punctatus) is a member of the family Ictaluridae.They are freshwater fish that inhabit rivers, streams, lakes and ponds in temperate environments. They appear olivaceous blue to off-white in color(ventrally), often dictated by the color of the water they inhabit.In clear water they seem almost black while in muddy water they appear as a slight shade of yellow.

The younger members of this species have spots distributed irregularly on the sides which disappear on growing. The body of the channel catfish is slender and scaleless, with a gently sloping dorsal profile anterior of the dorsal fin. It is white to silvery on the undersides, bluish olive, gray or black dorsally.the channel catfish consist of sharp spines in their pectoral and dorsal fins.

The optimum temperature for channel catfish to grow is 24-30 oC, although they can tolerate a wide range of temperatures and environmental conditions.

One unique feature of the channel catfish is the presence of taste buds found all over the external surface and inside of the mouth, pharynx and gill arches of it. They primarily detect food with their sense of taste. In clear water, eyesight can be an important means of finding food. However, in turbid water, taste is the primary way catfish locate food.

They feed on both plants and animals, during the day or night and most commonly found near the source of food, like near the bottom of natural waters. Young catfish feed majorly on aquatic insects while adults have a more diverse diet including insects, snails, crawfish, green algae, aquatic plants, seeds, and small fish. They also feed on terrestrial insects when available.

Where to find Channel Catfish

Channel catfish which are freshwater fish, prefer clear water streams but are also found in muddy water. They are more likely to be found in streams, large reservoirs, lakes, ponds. They are often seen at the bottom where it is sand, gravel or rubble. They can also thrive in brackish water.

Channel catfish were originally found in the northern borders of Canda, Mexico, along the Gulf states and the Mississippi Valley. They are distributed widely across North America and rest of the world.
One can expect to find the channel catfish in areas where it takes cover under rocks, logs or any form of rubble or vegetation. Young channel catfish feed in shallow riffle areas just above pools, cut-banks, snags, rocks and other submerged structures in streams.

Channel Cats are a lot smaller than their blue and flat-headed counterparts. Most channel catfish fish do not exceed 20 pounds and anglers are usually looking for numbers more than size when targeting them.
In natural waters, on an average channel catfish weighing 2-3 pounds is common. They do not reach 1 pound in size until they are 2 to 4 years old.

The highest recorded weight of channel catfish is about 58 pounds, and sometimes ones weighing 50 pounds aren’t a rarity either. Most farm-raised catfish are harvested at a weight of 11/4 pounds at an age of about 18 months. Baits for channel catfish range from from nightcrawlers, leeches, chicken blood, chicken liver, chicken or fish guts, crawdads, grasshoppers, water dogs, live and dead minnows, cut bait and a variety of prepared stink baits. Easy to store prepared bait is one of the most popular catfish baits. Prepared baits usually have one thing in common – cheese.

Smaller channel catfish follow scent trails and it is advised to use stink baits for them. Dip baits and punch baits are preferred baits for catfish by most anglers. The bigger channel crayfish can be lured more easily with fresh dead baits than stink baits. Catfish actively eat fish flesh and other animals that die during winter and sink to the bottom. The stronger the rotten odor of bait, the better the success.

In late winter and spring, the cut bait or dead minnows are used. When the temperature e is less than 60 degrees half-rotten fish as baits yield fruitful results. Fish in deeper areas of the lake or stream before ice melt then shift to shallow water that warms faster and draws catfish into the near-shore reaches. Catfish can be caught under ice, but feeding picks up after the water temperature reaches 40 degrees.

Many catfish anglers switch to prepared baits when water temperatures warm to 70 degrees and above. Prepared bait is most effective for pan-sized catfish in mid-summer (June, July and August).
Large catfish can be lured by use of large baits such as dead bluegill, water dogs, live chubs, crayfish and frogs.

How to catch Channel Catfish

As mentioned earlier the channel catfish tend to inhabit logs, boulders, rubble making these areas highly probable to find a channel catfish. In small rivers they take up the deep pool below the rapids. In large rivers they hid themselves below any structure that provides them cover.

Now for the equipment one needs to catch channel catfish include: short rods for lakesn 6 to 8 feet rods for rivers, fly rods. Longer rods offer better placement of the bait and lets you fish many good holes without casting.
The Carolina Rig and Santee Rig are commonly used rigs by aglers for catching catfish, used from when on a boat or the bank. Terminal tackle is an important consideration when setting out after “old whiskers.” The sinker and hook is the most important part of the terminal tackle.

Always use the lightest weight needed and a slip sinker. The slip sinker rig lets a catfish pick up the bait without feeling the weight of the sinker. A medium action rod/reel combo spooled with 15-20 lb line is a good place to start when catching catfish. The more advanced anglers may go heavier with rods and fishing line, especially if they are targeting trophy catfish.

Light duty reels are used for the smaller, light-weight one whereas heavy duty reels come in handy for the bigger, heavier ones. Make sure to use sharp hooks with bait holders on the shank. When using cheese baits make use of sponges or plastic worms. Circle hooks are used in case of live or cut bait. Slowly pull back on the rod when it starts to double over as the fish takes the bait. Quick hook sets typically result in missed fish. When used properly, circle hooks reduce the chance of the fish swallowing the bait as they are usually caught in the corner of the mouth

Channel catfish are easier to catch during spring, summer and early fall when the water levels rises ad washes off terrestrial insects and feed into the water body, increasing the available feed and making the channel catfish more active during these times.

Catfish become less active when water levels fall. During times of stable or rising water levels nearly all baits will produce good catches of catfish. Use baits that are most available under natural conditions.
Spring time is when catfish fishing season begins as the ice goes out and channel catfish move to eat winter-killed shad.

The backwaters and shallow mudflats during this time are full of dead shad post-winter, making them preferred spots for catching the channel catfish. It is advised to use cut bait or shad on the bottom in the mouths of these backwaters and shallow mudflats.
Look for diverse habitat – the more diverse the habitat, the more attractive it is to catfish.

Spawning season of the Channel Catfish

Channel catfish ideally spawn in temperatures of about 27o C or any range between 23o C to 30o C. channel catfish are what some professionals call “cavity” spawners for they spawn only in secluded, semi-dark areas. Male catfish build nests in holes in the banks, undercut banks, hollow logs, logjams or rocks I natural waters. Wild catfish spawn anytime between late February to August.

The male catfish prepares the nest on the bottom of the lake/river by spreading as much as mu and debris as possible. Spawning takes place as the female catfish is attracted to the nest and lays a gelatinous mass of eggs. The male fish then defends and safeguards the nest until the fertilized eggs hatch.

Females spawn only once a year, producing about 3,000 to 4,000 eggs per pound of body weight, while the males may spawn more than once. After the eggs are laid they will usually hatch in 5 to 10 days depending on water temperature. At 78° F (26° C) the eggs will hatch in about 8 days..